SHORTMAT - THE LEAGUE POSITIONS AFTER PHASE ONE ARE HERE


IF YOU WISH TO PLAY - PLEASE ADD YOU NAME UNDER FIXTURES - NOTICEBOARD AT THE CLUB
Or Let Mike Nash Know!

Wedmore - Lost by one shot but should have won by one shot if two shots away on last end had been applied!
PLEASE NOTE : An additional Fixture has been arranged with Wedmore for the 13th. February @ 2.30pm.  A Mixed match.
Please advise Mike Nash if you wish to play.

NORTH PETHERTON ON 8th JANUARY 2022
THIS MATCH HAS BEEN CANCELLED BY THEM! .

COVID - UPDATE
The English Indoor Bowls Association have directed that Bowls Clubs across the country must adopt new "PLAN B" Covid-19 Update requirements as of Friday 10th December for the next 6 weeks or until further notice.
These requirements effectively mean the following:-
Face coverings are now legally required to be worn when entering or moving around St. Andrews B.C. Clubhouse. They can be removed when playing bowls or when seated, having a drink or eating indoors.
Obviously, there are some people who - due to age, health or disability - are exempt from wearing face coverings; the Club is not obliged to request proof of exemption.
Also, if anyone lives with or has been in contact with someone who has been identified as a suspected/confirmed case of the Omicron variant, they must self-isolate for 10 days, even if they have been double or triple vaccinated.
A notice to the above effect has already been placed on the front door of the Clubhouse.
Enquiries have already been received asking what this means to Club Members and visitors.
Effectively, if you're playing bowls, you're not required to wear a face covering. Also, if you're seated watching a game, playing Bingo, Quizzing, having a meeting, having a drink or snack, etc., there is still no requirement to wear a face covering.
However, when coming into the Club and moving around within the building, a face covering is required to be worn. We hope you can support the Club and your fellow Members by following this latest update.

The new Winscombe Indoor Knock-Out Cup will take place at St Andrews BC on Tuesday afternoons,
on 11th, 18th and 25th January  2022, from 4.15pm – 6.15pm.
Teams will be as per the 2021/2022 league season.
As there is no finishing bell on Tuesday afternoons, all matches will be over 14 ends with an extra end if games are tied.
Dead ends to count as played ,with a 2 shot penalty for a dead end on the last end.
All other existing league rules will apply. 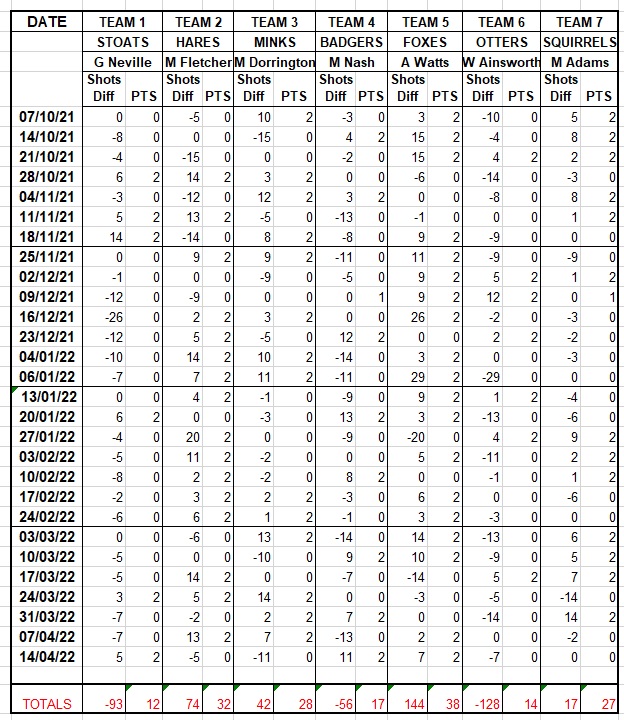 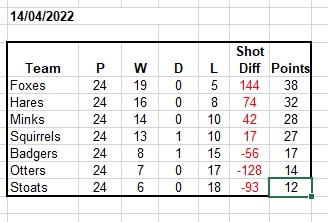 a)     SUBSTITUTES All players are responsible for arranging their own replacements during
their absence. FIRST CHOICE must be (1) selected from the list of Reserves – (2) If NO reserves are available your opposite number from
the resting team. Substitutes MUST be drawn from the Group (reserves and listed players.
Other ad hoc substitutes are not acceptable even in exceptional circumstances even if this means a game being played 'two versus
three' NB For security reasons Members telephone numbers are not included on your Indoor Team sheet.
Telephone numbers can be found in the Winscombe Fixtures book.

b)      SYSTEM FOR 'TWO VERSUS THREE'
The LEAD and the TWO ,of the team of three, will each play with two woods, and the SKIP with four woods. The team of two will play with
four woods each. Thus the two skips will compete on equal terms and all players walk to the other end together. The team of two
will have  a reduction of 20% from their score (rounded down). To be ready for this eventuality skips should always bring four woods.
The absentee must pay the missed green fee the following week.

c)      DEAD ENDS count as played ends, with a two shot penalty when on last end.

d)      GAMES end at 16 ends, or at completion of the end in progress at the
buzzer. The jack must be bowled and centred before the buzzer sounds.